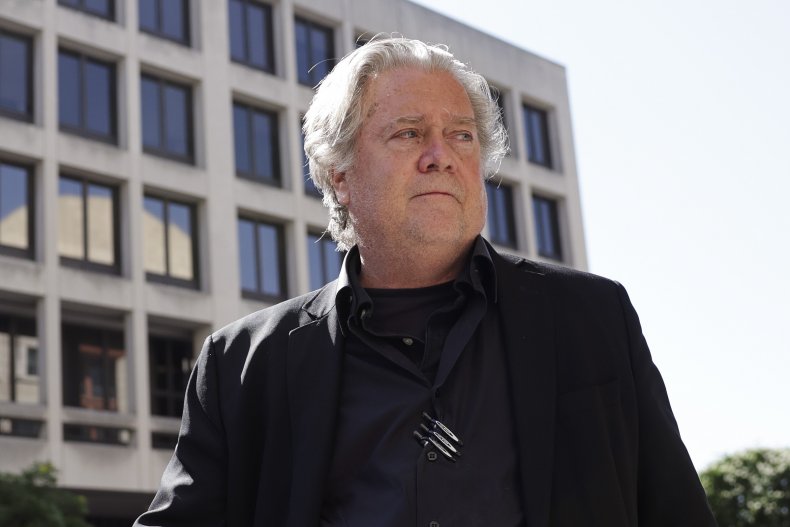 Right-wing strategist and podcaster Steve Bannon is slated to go on trial Monday on charges of contempt of Congress, with one legal expert assessing that the prominent ally of former President Donald Trump appears to be pursuing what is sometimes referred to as “a long guilty plea.”

Last year, Bannon, who served as chief executive of Trump’s 2016 campaign and as a White House adviser during the first year of his presidency, was subpoenaed by the House select committee investigators in connection to the January 6, 2021, attack against the U.S. Capitol, but he refused to comply. In a narrowly bipartisan full House vote, the Trump ally was referred for prosecution for contempt of Congress to the Justice Department.

In November, Bannon was indicted by a grand jury. A federal judge last month declined to dismiss the contempt charges, and the former Trump administration official is now headed for trial. The judge for the case, U.S. District Court Judge Carl J. Nichols who was appointed by former President George W. Bush, has suggested Bannon should instead seek a plea deal.

The Washington Post reported Saturday that Bannon’s attorney, David Schoen, asked Nichols: “What’s the point of going to trial if there are no defenses?” The Republican-appointed judge simply replied, “Agreed.”

“Obviously everyone’s entitled to a trial, but usually if you go to trial there’s some kind of legal or factual dispute that needs to be resolved,” Randall Eliason, a George Washington University law professor and former federal prosecutor, assessed in comments to the Post.

“The judge’s point is, there aren’t really any here…In those instances, going to trial becomes what prosecutors sometimes call a long guilty plea,” Eliason explained, who speculated that Bannon may want to present himself as a “martyr” for the so-called “Make America Great Again” movement of Trump supporters.

“Maybe it’s just a show to him, one where he can play the MAGA martyr and use it to raise his profile,” the legal expert said. “That’s not a legal reason to go to trial but it may be enough of a reason for him.”

Schoen responded to Eliason’s assessment in a Sunday email to Newsweek.

“Unfortunately, many of the ‘experts’ quoted in the media, while undoubtedly smart and capable folks, do not follow all of the details in the case and do not take the time to contact the lawyers directly involved before commenting. Had this professor done either, he would have learned that as of this week, the judge decided that there is one factual area he is inclined to allow the defense to pursue at trial by way of a defense,” Bannon’s attorney wrote.

“However, if the Professor’s underlying comment is that the judge has eliminated just about all of the defenses in this case, he is correct and that is what led to my comment to the judge that has been quoted, asking what the point is of having a trial with no defenses and Mr. Bannon unable to tell the jury what actually happened,” he added.

The last time someone was convicted for contempt of Congress was nearly five decades ago in 1974, Forbes reported Saturday. That was when G. Gordon Liddy was found guilty in connection to the Watergate scandal that eventually led to the resignation of former President Richard Nixon.

A contempt of Congress case hasn’t even gone to trial at all in nearly 40 years. The last time was under former President Ronald Reagan in 1983, according to Forbes. Environmental Protection Agency (EPA) official Rita Lavelle was found not guilty in that case. She was, however, later convicted on a separate federal perjury charge related to misappropriation of EPA funds.

If convicted, Bannon could face between 30 days and one year in prison.

Bannon has argued that he could not comply with the subpoena due to executive privilege. But legal experts have contended executive privilege does not apply because it’s not clear Trump ever invoked privilege, and Bannon was also a private citizen, not serving in the administration, at the time of the 2020 election and on January 6, 2021. He officially served in the White House from January to August in 2017.

Bannon was previously indicted in August 2020 for allegedly defrauding donors to a crowdfunding campaign to help build Trump’s long-promised wall on the Mexican border. Trump pardoned him on January 20, 2021, just as he departed the White House at the end of his term.

veritecatering.com
We use cookies on our website to give you the most relevant experience by remembering your preferences and repeat visits. By clicking “Accept All”, you consent to the use of ALL the cookies. However, you may visit "Cookie Settings" to provide a controlled consent.
Cookie SettingsAccept All
Manage consent